It was a bittersweet day (June 4, 2018), but we (the cats and I) made it through. He would have been 73. I cried a few times, but he wouldn’t have wanted me to be sad, so I tried to keep that in mind all day. I was remembering how much he made me smile and found myself laughing a lot! I loved that I could laugh through the tears!

Once I’m paid again I’ll do something we always said we would do together, but simply never got around to it: a painting event. I want to choose the correct painting to do, not just anything. Today I also dyed my hair purple, though I didn’t leave it in long enough or cover it, applying heat as advised. It’s more highlights. That’s okay. I also got my hair cut professionally for the first time since just before dad’s memorial. Last time I shaved it myself. It was time to be shaped.

We miss you, dad. Leia is always in my lap and Yuna licks me any chance she gets. You and the kitties are the photo on this month of the calendar. You are never far from my heart, dad. I love you very much. 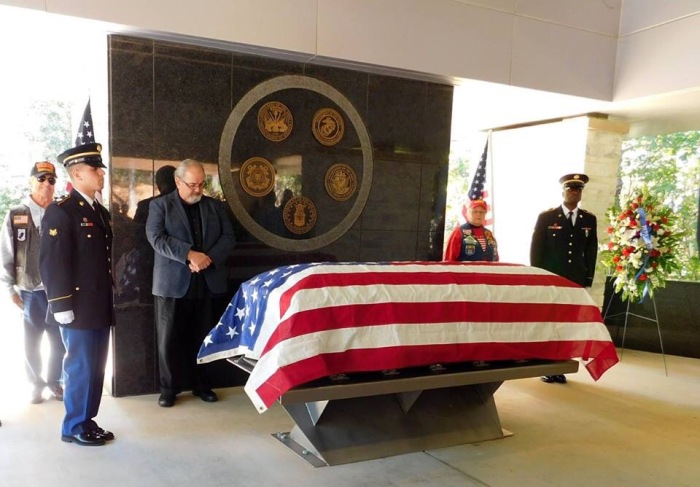 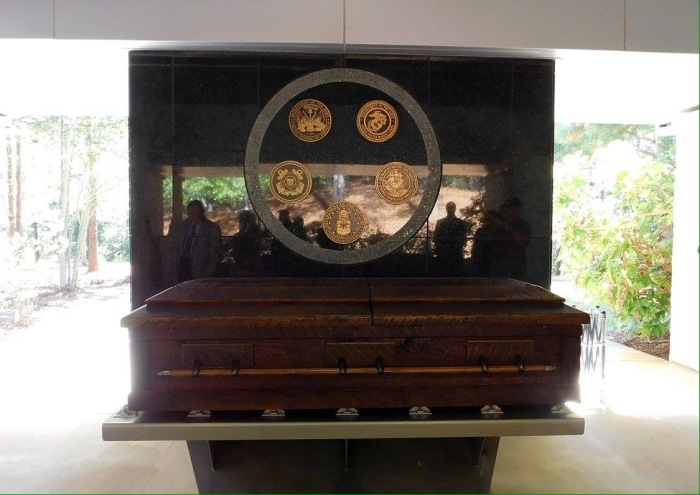 The biggest thing to have happened is my father passed away on October 8, 2017.  I miss him dearly.  Sometimes I forget to miss him and expect to see him in the morning, then the cats remind me that they are having adjustment issues.  We’re each grieving in our own way.

Chris came from Sweden when dad got sick to spend time with him when we all realized how serious it was.  Dad’s small cell lung cancer came back with a vengeance.  His scan, which was clear in July, became a 13cm (~5 inch) mass on an exray he received at a doc-in-the-box when insurance wouldn’t cover another scan so soon (August/September) when he was coughing after a clean scan.  He took medication to breathe easier, but nothing worked.  Dad finally took it upon himself to go to the doc-in-the-box, who sent him to the hospital emergently.  He stopped off at home to get his bi-pap before checking in on September 18th and never came home.

His doctors were flabbergasted and apologized profusely.  Didn’t help dad much by that time.  He had some radiation treatments but it was determined they were harming his good lung by filling it with fluid and making it more difficult to breathe.  Nothing could be done.

So, Chris was able to see dad doing well (and in good spirits more or less) and was here when he passed away.  He returned home afterwards.  I appreciate him coming to spend the time with dad.  I know it meant a lot to dad.  Both of them, really.  I also appreciate he needed to return to his family where he is a husband and father as soon as possible.  He was here for the most important part, dad alive. 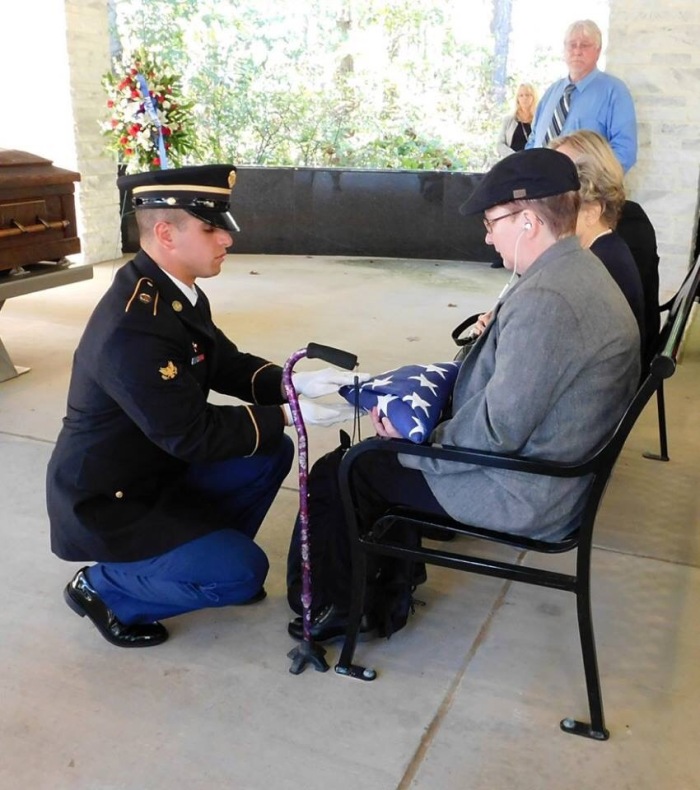 I was presented with the flag at dad’s military funeral.  I gave my first eulogy.  Now I have a huge house full of stuff and I’m moving to a one bedroom apartment sometime before the New Year.  Dad and I moved in together just before 9/11: August 2001.  He was essentially my caretaker for a long time.  It’s time I step out and move on.

On the upside, I’ve been waiting for confirmation that my SSDI was approved since I requested a Reconsideration of the denial at my 5 year review.  The confirmation came through last week – I’m approved!  Then Friday I was approved for the apartment complex I hope to live in!  So, I’ll be next door to a medical center that takes my insurance, near my new orthopedic doctor (I chose to deal with a shoulder injury I accumulated sleeping on a mattress on the floor for a year), and near transit.  All of the above are unheard of around here.  It’s unbelievably excellent!  If I had to deal with this in any way and in any place, it’s working out well.

I don’t know when I will move yet.  It could be mid-November or not until late-December.  The apartment complex knows I’m flexible with my move in date.  I prefer a specific type of location within the complex.  There is one of those available now.  If I am the one chosen for that apartment, I will move sooner than later and have until the New Year to clear out this house.  Otherwise, I’ll be living here and cleaning with my bum shoulder at the same time.  My neurologist already filled out the paperwork for disabled transit.  Hopefully it goes through.  Wish me luck with everything!

I’ve had the sticky note about the date of my WADA test (Feb 13, 2007) stuck to the wall near the door of my apartment for as long as I can remember.

THAT was a bizarre experience.

I was forewarned much of what to expect on the (then ecommunities) forum board of Epilepsy Foundation.

I watched videos on YouTube and read online about the procedure.

This was unpublished since February, now I see why. It isn’t finished… Ah well… I’m not deleting. I’ll find a link about WADA and post it.

HALF the brain is put to sleep, then the other half, as they test for function and language!  For as much as I could comprehend in that state, it was something to experience. 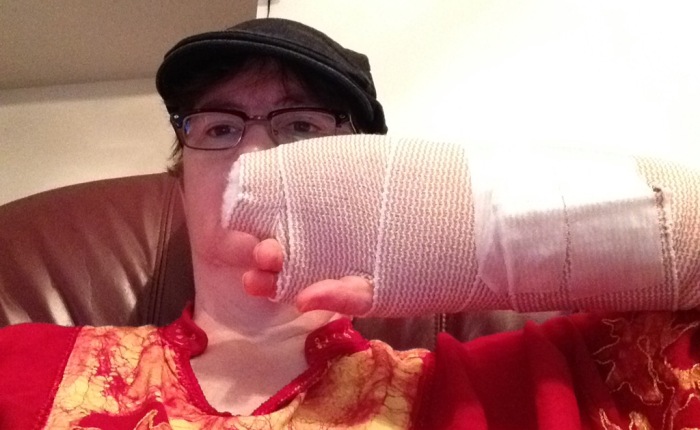 iStiLl HaVe viSuAL VeRTiGo, bUt iT iS mAnaGAbLe

iWRoTe tO tHe TrEAtMenT CTr tO DIscovER My OLd PT

— this is the writing I submitted, but wasn’t published. I gave it to my ViSuALvErTIgO therapist (PT), who I haven’t actually been able to begin therapy with because of my FUCKING hand. I had to fight to even discover there was a TREATMENT for ViSuALvErTIgO  <- ever since I wrote this in late May, my auto type has saved this.  I love it!  I respectfully requested permission to use it on my blog, knowing anyone could share it, and it wouldn’t be “hers” anymore once I placed it here.  I’m simply placing it online while I’m thinking of it now; In bed.  I’ll write more about my hand tomorrow, or when I’ve finished my second set of SSDI paperwork sent to me, probably because of my trip.  Goodnight. 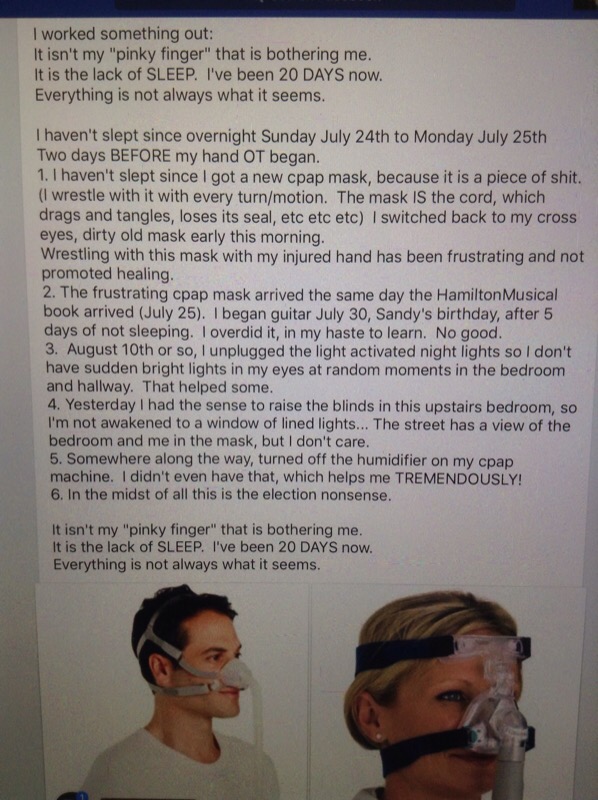 I’ll leave this here.  I’m going back to bed.  Dad started coughing and a startling jolt to my system every 5 to 10 seconds. 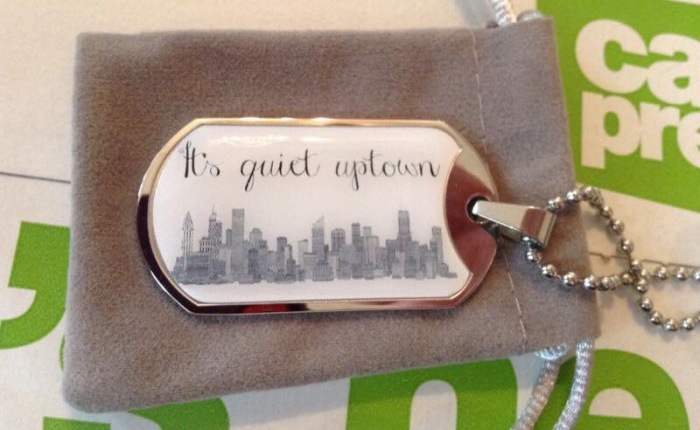 I’m a Hamilton.  The musical is FAR more than I expected.  I never thought I would enjoy hip-hop, yet I know the full musical by heart!  That’s what it takes, sometimes, for Lisa to try something new.  Make it ABOUT HER and she’ll pay attention.  So he did.  Thank you, Lin-Manuel Miranda.  Like many, I dare say, most Americans, I knew nothing of Alexander Hamilton until you wrote your musical based on Chernov’s biography.  I have his book as well, but I have a problem with reading paragraphs since my ViSuALvErTIgO kicked in Summer of 2010.
I carried a stone for A.Ham from October 2015 until I left it upon his grave on April 23 or 24 (I will look up and confirm the date, I believe it was the 23rd). Yes, the 23rd. I carried it with a stone for Anne Frank.  My Survival Day 20 trip was as much about Anne and Holocaust rememberance as it was about my SurvivalDay.  We have a wolf at the door.  It is frightening how few people who shout and scream about losing freedom ignore the wolf at the door.

I am posting this now to post the images I have from the graveyard at Trinity and where I stayed and strolled on Jane Street, where A.Ham died after his duel.  I believe the day I left the stone for A.Ham was also the day I fell, injuring my hand.  As I’m learning “It’s Quiet Uptown” on guitar as part of my Occupational Therapy in recovery, I guess this brings me full circle.  My OT said if I practice guitar for 1/2 hour a day that can count for therapy, I can ignore the exercises she gave me.  Done.

Update: August 8, 2016, but not saved until after midnight, so August 9, 2016:  I changed the image from the one I took of Hamilton’s tomb to my dog tag, because this isn’t a normal fan post.  I would also like to thank annalisareyanne and her redbubble page for its products/designs of HamiltonMusical.  It was her image I used, with permission, for this dog tag on cafe press.  My tag isn’t searchable, that I know of.  I’m not set up, or interested in making money.  I’m also szrgirl on YouTube.

Practicing guitar after 3 months in a wrist brace and finger splints was a HUGE MISTAKE, though!  I played for 20 minutes in one day, understand I don’t really know how yet, and spent the next 2 days in EXCRUCIATING PAIN!  I was in tears today at OT.  She told me to #TakeABreak so I will.  I see my epileptologist tomorrow, OT Thursday, ViSuALvErTIgO Friday…  and on it goes. Doctors Doctors Doctors… 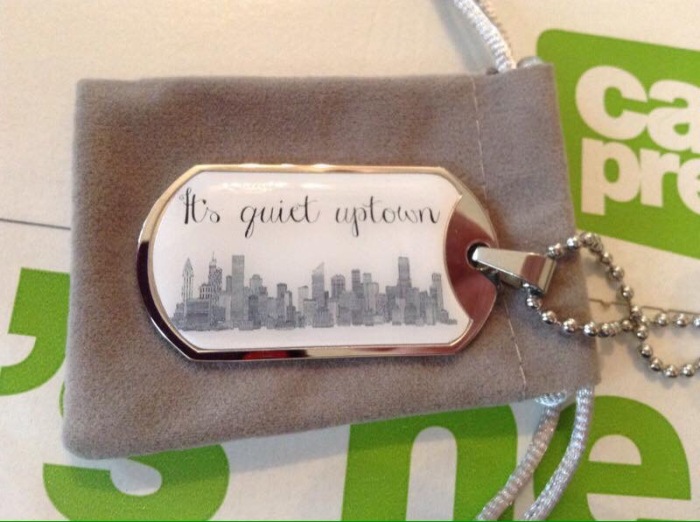 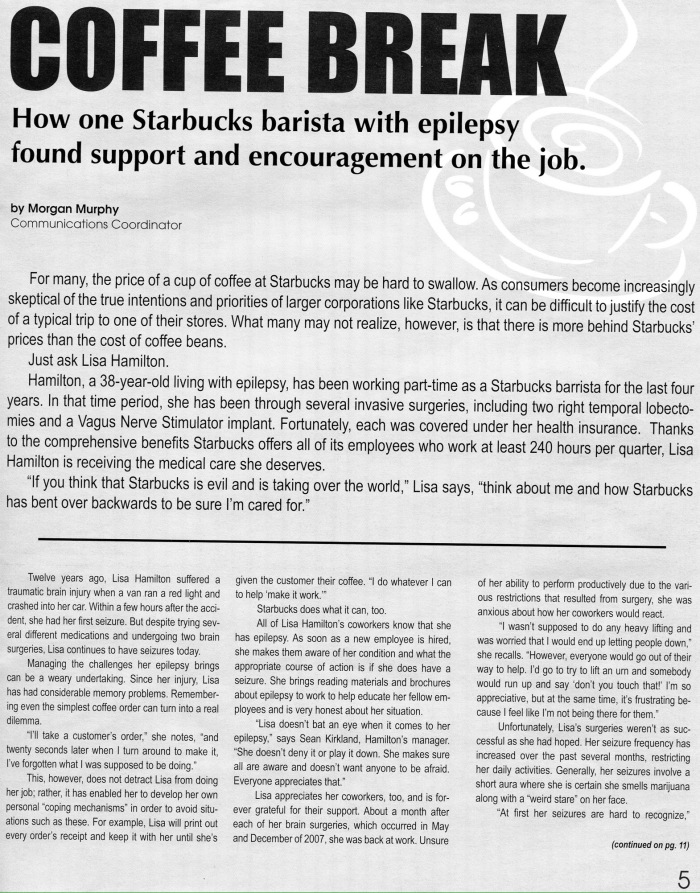 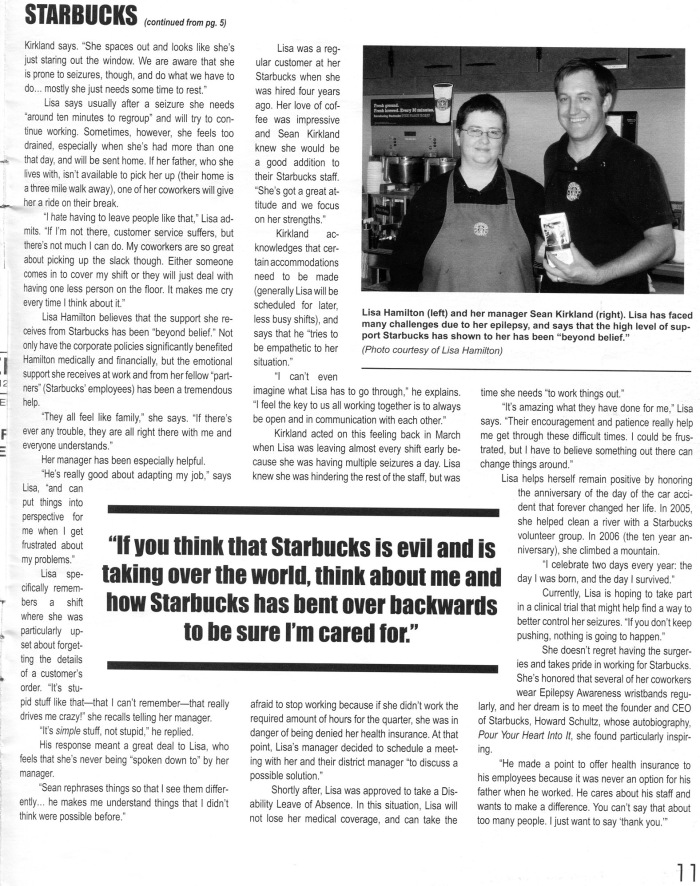 and now I type… This was available online Coffee Break until I was about one week into traveling for #SurvivalDay20.

It’s nearing midnight and I’m typing one handed, predictive-type-assist, so I won’t edit much here and now, but THIS explains the beauty of my interaction with Starbucks and the importance of Survival Days. 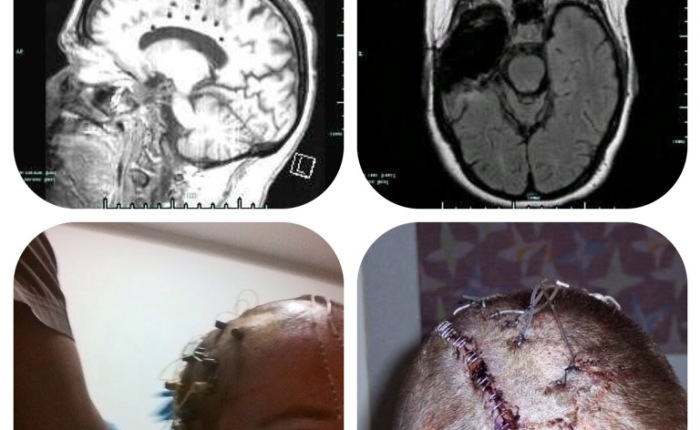 I entered a writing competition yesterday on Instagram and Twitter with #SixWordMemoir Theme: The Six-Word Spoiler Of Your Life

My entry includes the photo of this post: “SPOILER: My brain. Pieces not important”

The TOP SIX entries will each receive a copy of “A Series of Catastrophes & Miracles!” The website: http://www.sixwordmemoirs.com/story.php?did=1053121 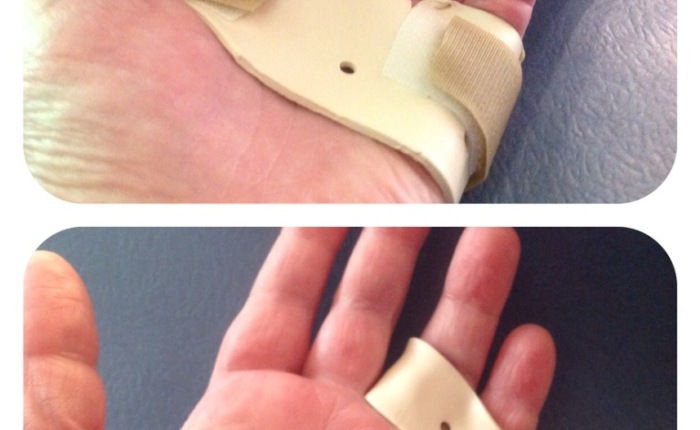 The photos of the splints. I’m hopeful the ligament will repair itself, but not optimistic, as I waited nearly 5 weeks to have my hand looked at after the injury.  I’m typing with one hand and guided by predictive type.

No telling how much surgery would cost.  We’ll find out, I suppose.  At least my cough is gone.  It was my blood pressure medication.  I lost 50 pounds and my blood pressure improved to the point I could be taken off the med, for now.  It runs in the family, though.  I have a new “allergy” on my drug list and if I need it again, my doctor says we’ll try something else.

Oh, and I had my first seizure since Amsterdam yesterday.  Lucky me.  Just a simple partial.  Not a big deal.

Moving on to coffee and our current Netflix binge watch show: Chuck.  Til later, folks.